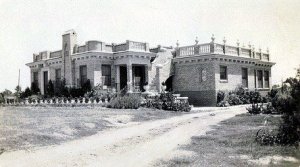 My father told me that they danced on the roof. Marguerite Cade vividly remembers the dances and the Victrola music from all those years ago. Looking at an old photograph of the Bartlett home, I can almost hear the music and see the young men and women dancing the night away on the flat roof under the stars. That was over 70 years ago, and today, the once-elegant Bartlett house is the subject of a feature entitled, “Save This Old  House: An Endangered Home Worth Rescuing,” which appears in the current issue of This Old House Magazine. According to the article, the home’s owner, Thomas Anthony Bartlett, “…used a one-time run of ‘buff’ brick to build himself this quirky castle, complete with 18-inch thick walls, wraparound parapets, and a steel-reinforced concrete roof, built for dance parties.” (“Save This Old House”, by Ryan Robbins, This Old House Magazine, March 2004, page 134, This Old House Ventures, Inc. Copyright 2004 by This Old House Ventures, Inc.)

Along with the Flagg home, the Bartlett house was a showplace of Malakoff during the ‘30s and ‘40s, but today, it stands in need of repair and is
difficult to see clearly because of the overgrowth that blocks the view of its unique features. The house sits just down the street from the entrance  to thebrick plant that T. A. Bartlett founded. Established in 1903 as The Malakoff Pressed Brick Company, the plant was operated by T. A. Bartlett until he sold his interest in the business in 1942. If you look closely at one of the  parapets on the front of the house, you can still make out the large “B” that identifies the building as the Bartlett home. I stopped by last month hoping to get a good photograph of this old house because I have heard so much about it over the years.

In doing research on the home’s owner, I discovered an article in the book, Family Histories of Henderson County, Texas, Volume II, 1846-1993, which asserts that T. A. Bartlett was born in Chatfield, Navarro County, in 1876.  Bartlett’s father came to Texas in 1832 from Tennessee and  setttled at Washington-on-the-Brazos, eventually moving to Corsicana when T. A. was almost two years old. The article’s author, Theretta Bartlett Pickel, said that when he was a young man, T. A. Bartlett was a distributor for the Schlitz BrewingCo mpany. He met Willie E. Broyles, from Rural Shade, Texas, and they were married in 1897. They moved to Malakoff in 1903 where they reared their family of five children, one son and four daughters. (Family Histories of Henderson County, Texas, Volume II, 1846-1993, page 19, Taylor Publishing Company, Dallas, Texas, Copyright 193 by the Henderson County Historical Commission, Athens, Texas)

T. A. Bartlett also once owned a cotton gin and several rent houses and etablished the Malakoff Mercantile Store in 1915. His daughter, Theretta
Bartlett Pickel, wrote that “…He sold most anything a person would need: hay, grain, farm wagons, and farm implements, furniture, coffins, dress
materials, shoes, millinery items, and groceries.” She further stated that, “He was one of the first in Malakoff to have electric lights in his home.” (Family Histories of Henderson County, Texas, Volume II, 1846-1993, page 19, Taylor Publishing Company, Dallas, Texas, Copyright 1993 by the Henderson County Historical Commission, Athens, Texas)\

Many people from Malakoff have fond recollections of the Bartlett home. Betty Mitchell remembers:

“It was the fanciest thing in Malakoff. My sisters Doris and Lucille would get invited to parties there. The roof was flat, and that is where the parties were held in the summer time. They had dances on top of the house. The Bartlett children were several years older than me. By the time I was old enough, they were all gone from home. I just remember the house and how pretty it was. It was across the railroad tracks from my grandmother’s house.

David Dodd recalls exact details about the beauty of the Bartlett home. He says that there was a veranda that ran across the entire length of the back of the home. It was 10 feet wide and completely screened. On the east side of the house were the kitchen and breakfast room, both magnificently large and spacious. The foyer had a marble floor, and there was an outside staircase with marble steps leading to the roof.

The master bedroom was a sunken room seven or eight steps below the porch level. There were four additional bedrooms and a sitting room. Mr. Dodd also remembers an uncovered patio on the east end of the house. And then there was the basement, which was apparently very large as well.

David Dodd recalls that Mrs. Bartlett was a wonderful cook and that the home was, “…very elegant, very beautiful, and very well-kept, with an
immaculate garden.”

Loretta Humble recently spoke to Michael Cotrone who is listed as the contact in the article on the Bartlett home in “This Old House” magazine. A veterinarian from Georgia apparently has a contract to purchase the house. Mr. Cotrone told Loretta that he has received 720 calls inquiring about the Bartlett property. I would love to meet the gentleman who bought it. I hope he restores this historic old house exactly as it was when it was new. Perhaps he will read this article and invite me to a grand party when the restoration is done. It would be wonderful to dance on the roof under the stars…with my first love…

2 thoughts on “A “Bit” of Remembrance – They Danced on The Roof: The Bartlett Home in Malakoff”