The new Texaco service station, which has been under construction for the past several weeks on the Paul Bankston property at the Terry Street-Highway 31 intersection is now rapidly nearing the completed state and will be ready for occupancy within the next several days. 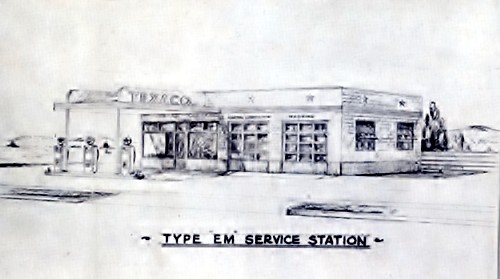 The new building of brick, concrete, and steel construction is being built according to the specifications of The Texas Company and will be under lease to that organization for a ten-year period.  The structure is fully equipped into a modern service station with rest rooms, washing and grease racks, and includes attractive office and showroom quarters.

Bill  Bradshaw of Malakoff has accepted the contract from the lease holders for the operation of the station and has been busy this week laying in his stocks and supplies in order to have everything in readiness for the opening day.

The operation, which resulted in the removal of two large cysts from one of his kidneys, was entirely successful, and the attending physicians said that the patient effected a much more rapid recovery then they had had reason to expect.

Paul is reported to be getting along fine, but it is expected that it will be two or three weeks yet before his recovery is complete and his strength fully regained.